Tarot cards readings are among the most popular and well known types of psychic readings available. They are based on the interpretation of a deck of playing cards called a tarot deck. These cards date back to 15th century Europe, and today can be found anywhere from traveling fairs to chain stores.

However, just because anyone can purchase a deck does not mean that anyone will necessarily know what to do with it. Just as you wouldn’t entrust other important aspects of your health and well-being to amateurs, or try to perform a medical procedure on yourself, you should also ensure that your psychic needs, including tarot card readings, utilize a trained professional.

Here is a brief explanation of various aspects of tarot card decks and readings so that you will know what to expect when you visit a psychic. 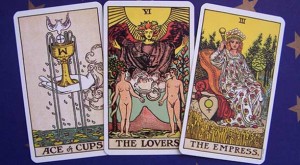 Tarot cards come in a deck of 78 picture cards with titles. The deck is divided into the Major Arcana (22 cards) and Minor Arcana (56 cards). During a tarot card reading, a psychic will shuffle the deck and lay the cards out in various spreads – specific patterns and positions- which can involve anything from one to several cards. These are then used to interpret the past, present and future.

Cards in the Major Arcana are believed by some to be the most important part of the deck and represent a person’s path through life. These cards depict entities like the fool, the magician, temperance, the lovers, death, the hermit and the wheel of fortune. These are not read literally, but instead each represents a different focus. For example, the appearance of the death card does not mean you or someone else will die, but rather it can signify new opportunities.

How the tarot cards are arranged on the table is called the spread. There is a great variety of different arrangements a psychic can use, either for general readings or to address specific issues or questions. Among the most simple and common will be the 3 card spread and the Celtic cross. The 3-card spread will have 3 cards placed in a row. They will represent past, present and future. This spread is best suited for quick answers to general questions. The Celtic cross uses 10 cards, 6 arranged in a cross and the remaining 4 in a column on the side. This spread is well suited for generating answers to specific questions or providing an in-depth general reading.  Sometimes 11 cards will be used to form the Celtic cross spread.

Welcome To My Blog